One of the frustrating things about learning grammar is that there are a lot of rules but also a lot of exceptions to those rules. The exceptions make it tough for people to remember things like when to use affect vs effect, or where to place those pesky commas.

One way to learn the conventions – note that I did not say “rule” – is to read a lot. The more you read, the more you grow accustomed to how language is commonly used. Sometimes that’s a good thing, because you start to feel comfortable with how to use commas most effectively. Sometimes that’s a bad thing, because you start to you write “night” like “nite.” [Shudder]

Actually, any professional linguist will tell you that language is fluid. Language changes all the time, but happens so organically that we often don’t realize it. Give it a few more decades or maybe a few hundred more years, and “nite” will become the way that word is actually spelled. 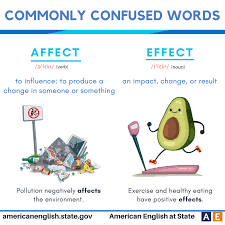 When it comes to whether or not to use “affect” or “effect” there’s a rule, and then there’s when to break the rule.

That’s it. It’s that simple.

To affect a change means that action is taking place, so affect is a verb and gets the A spelling.

To have an effect on someone means that effect is a thing that is happening to a person, and is therefore a noun, and gets the E spelling.

If you remember the affect/noun, effect/verb convention, you’ll be right pretty much all of the time. Except, when you talk about mood. Sometimes, with psychology, affect is a noun. For example, “The patient exhibited flat affect and wasn’t showing emotion at all.”

And sometimes, effect can mean “to bring about.” For example, “The new principal hoped to effect positive change on the student body.”

So, commit the affect/noun, effect/verb convention to memory and you’ll be in good shape.

Here’s a handy pneumonic device to help you remember:

A for apple and aardvark, which are both nouns. Pneumonic devices are meant to be silly so you remember them. If you say to yourself “affect apple aardvark,” you’ll remember that affect = noun, just like an apple and an aardvark are nouns.

E for elevate, which is a verb. “Effect elevate” = verb.